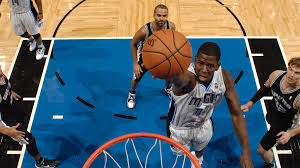 The Orlando Magic are a young team looking to make a playoff push within the next two years. That means they are trying to find their ‘true’ core of players to go with for their future. Andrew Nicholson may not be apart of that future. The third-year power forward out of St. Bonaventure University had a promising rookie year averaging 8 points and 4 rebounds, while also playing in the 2013 Rising Stars Challenge.

Since then, his numbers have spiraled downward losing playing time to the likes of Nikola Vucevic, Channing Frye, and Kyle O’Quinn. ESPN’s Marc Stein was first to report the Magic’s trade activity:

“Orlando, thanks to a surplus of young big men, has made Andrew Nicholson available, according to league sources.Sources told ESPN.com on Thursday that the Magic are working with Nicholson’s agent, Mark Bartelstein, to find a new home for the 25-year-old Canadian, who was selected 19th overall by the Magic in the 2012 NBA draft.”

I am a student of St. Bonaventure University and I have seen my fair share of Nicholson. He was a great college player who had over 2,100 points in his four year career. He’s only 25, and still has one of the biggest upsides in the league. He would fit perfectly with a team looking for a young big man, or looking to make a playoff push. Atlanta would be a perfect fit as they just traded Adrian Payne. Nicholson would be a perfect back-up for a Paul Millsap. Coincidentally, Nicholson reminds me of a young Millsap.

How much will Donovan Mitchell improve the Cleveland Cavaliers?