This week, members of the Society will be looking at the top MVP candidates (Stephen Curry, James Harden, LeBron James, Russell Westbrook, Anthony Davis, and Chris Paul) and making the case for each one and why they deserve the MVP award. Today, we take a look at Chris Paul’s case for MVP.

The MVP race is tight and coming down to the wire. Each player, analyst, and fan has their own opinion on who should win the award and why. Today, I am looking at the impact Chris Paul has had on the Los Angeles Clippers and why he should be considered in the MVP race.

The Los Angeles Clippers are currently sitting in the 3rd spot in the Western Conference and are only a half game behind the San Antonio Spurs for the 2nd spot. The Clippers have won 12 of their last 13 games, losing only a tight one to the Warriors, which has significantly improved their chances of having home-court advantage in the first round. Chris Paul has plain and simple been the reason for their success.

When Blake Griffin suffered a staph infection right before the All-Star break that made him miss 15 games, some doubted that the Clippers could still make the playoffs. To be fair, in the packed Western Conference, that was perfectly fine to assume. But Chris Paul has been the leader the Clippers needed him to be to will this team to wins. Just look at the improvements in his game since the All-Star Break:

In the second half of the season, as you can see, Chris Paul has put up MVP caliber numbers. In the 15 games without Griffin, Chris Paul somehow managed to help the Clippers go 9-6 when they had to play 10 playoff teams and the Oklahoma City Thunder twice.

Chris Paul’s name hasn’t been mentioned with the likes of Steph Curry and James Harden in the MVP talks, but Byron Scott, head coach of the Lakers, believes Paul should at least be considered:

“So I’m a little biased because I still think he’s the best point guard in the league,” Scott said. “I think definitely the way he’s played this season, with some of the injuries that they’ve had, he definitely should be in the conversation.”

Now keep in mind, Byron Scott was a head coach in New Orleans for 6 years starting in 2004 and he coached Chris Paul for 4 of those years, so sure he might have a biased opinion, but what he says does hold some truth. Blake Griffin, as mentioned, J.J Redick, Spencer Hawes, and Jamal Crawford have all missed a big chunk of time for the Clippers this season and Chris Paul has managed to continue to lead the Clippers to wins.

If you don’t agree with anything else I have said, agree with this: Chris Paul is the best passer in the NBA. He knows where his teammates are at all times and ALWAYS finds them when they are open. Today, you are constantly seeing certain point guards throw up contested threes when their teammates are pleading for the ball because they are wide open. You do not see that from Chris Paul. Here are some stats to back up the fact that Chris Paul is the best passer: 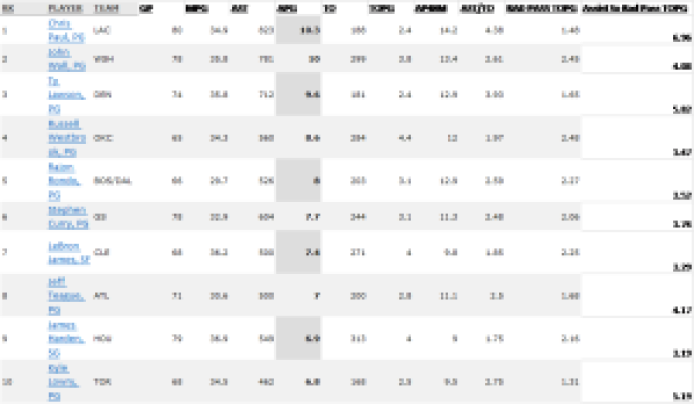 Chris Paul deserves to be in the MVP conversation. Now, does that mean he should be the one to win it? Probably not, but it remains to be seen. Even if Chris Paul does not win the MVP award, he had a fantastic regular season and has his team ready and in a good spot for the upcoming playoffs because of his efforts.