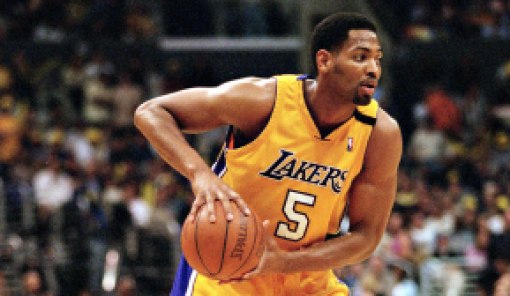 Robert Horry receiving the nickname “Big Shot Rob” was far from a coincidence. Widely considered one of the clutchest performers in NBA history, Robert Horry was a deadly three-point shooting power forward that many floor stretching big men model their game after.

In Game 5 of the 2002 Western Conference Finals, the Lakers faced deficits as large as 24 points in the first half. With 11.8 seconds left, the Lakers were down by two points and facing a 3-1 deficit with a loss. “Big Shot Rob” did what he knew best and that was hitting clutch shots. This was one of many for Robert Horry as he hit six total game-winning shots under 20 seconds in the playoffs. Here are some other clutch performances of “Big Shot Rob”:

Robert Horry is one of the most accomplished players in NBA history. Horry is one of only nine players to have won seven or more championships in the NBA. He was the only player on that list to have not played on the 1960’s Celtics. That stat alone can leave a legacy of “pure greatness” for an NBA player. Horry also holds the all-time record for three-pointers in the NBA Finals with 53. Being the first player to ever record 100 steals, 100 rebounds, and 100 threes in a season, Horry’s legacy is more than unfathomable statistics.

Sixth men and contributing role players today are known to create success in the NBA. Robert Horry defined the “role player”. He averaged 21 minutes per game from 1998-2004 and only started 56 out of 435 games during that span. Horry showed that contributing your part in important game situations is where your legacy can be defined. He created a path for bench players of today’s game to be successful contributors. Manu Ginobilli, who was a teammate of Horry’s in San Antonio, also created this legacy as he became a four-time NBA champion in his career. Ginobilli has been a successful “sixth man” for his whole career and I feel that Robert Horry created the way for bench players to have a legacy. With his contributions, Horry could be a future NBA Hall of Famer with the legacy that he created, a seven-time NBA champion with three different teams.

Being 6’10 and 240 pounds, it was rare to see a player of Horry’s stature to be such a deadly shooter. Today, there are the likes of Dirk Nowitzki, Nikola Mirotic, and Channing Frye, who all model their games after the likes of Horry. Some guards in the NBA today can’t even shoot three-point shots, let alone free throws, so when big men are able to be three point threats, it’s a big deal. Although Horry only shot 36% from three in his playoff career, players in today’s game are improving their three-point efficiency.

Horry left a legacy of “the clutchest performer in NBA history”. He was a player that demanded respect around the league because of the accomplishments that were achieved throughout his eighteen-year professional career. Even though his minutes on the floor were not the highest, his aura was felt on the benches around the league, and displayed in the final seconds of NBA games.