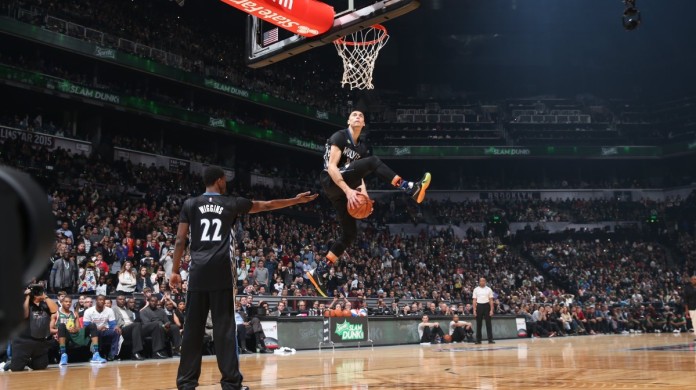 Last night, according the multiple reports, the four players participating in the 2016 Dunk Contest were announced for All-Star Weekend. Here are the players that will be taking part in this event on Saturday, Feb 13 at the Air Canada Centre in Toronto:

Barton, 25, is in the middle of his breakout campaign under his first full year in Denver. He is currently averaging 15.5 points off the bench and, yeah, he can bounce.


Drummond, 22, is the biggest competitor in this event. The recent named Eastern Conference All-Star reserve is averaging 17.3 points and 15.0 rebounds per game. He will be an interesting guy to watch due to centers not always competing in this event.


Gordon, 20, can jump out of the gym. We’ve seen him do insane dunks since his days as a McDonalds All-American. After an a struggling, injury-riddled rookie year, Aaron Gordon is come back nicely improving his stats while staying healthy.

LaVine, 20, won the competition last year. He threw down some pretty amazing dunks in his rookie year and sophomore season, and will be interesting to see if he can improve from his behind the back dunk.

I know what most of you are thinking. Where in the world is the hometown boy Andrew Wiggins? Well it turns out he declined to participate. In an interview with ESPN the second year player said this:

“….I’m not doing it again. Maybe one day, but right now, I lost in high school and I thought I should’ve won….”

In 2013, Wiggins competed in the McDonalds High School All-American Dunk Contest. It featured dunk contest participant Aaron Gordon, Jabari Parker, and Rondae Hollis-Jefferson. He made it into the final round but eventually lost to Chris Walker, who is currently with the Rio Grande Valley Vipers of the NBA D-League.

Will he ever change his mind? Maybe someday. But for now, this group of guys looks like an interesting bunch. The only thing I would change is expand it to a total of six players. Fans and critics have been saying the dunk contest is dead, but after seeing Zach LaVine’s performance last year, it looks to be taking a step in the right direction.