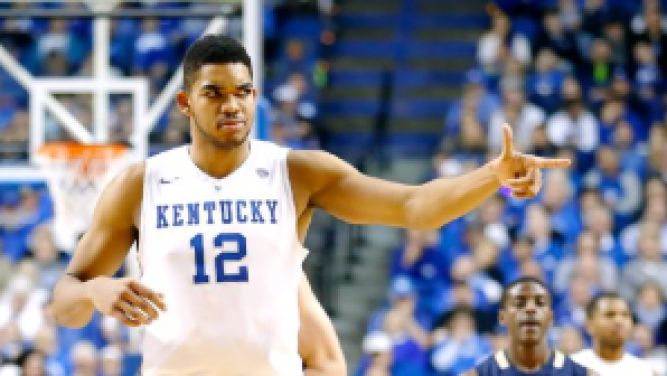 NBA Combine Measurements and Times: Did not participate

Karl-Anthony Towns was a menace in the paint defensively for the Wildcats all season. His ability to protect the rim will surely translate to the NBA. One thing that stood out from his freshman season was his incredible free throw shooting. His offensive game will still need work this offseason, though. During the college basketball season, Towns used his overpowering presence to get himself closer to the basket to keep his efficiency at an impressive rate. He won’t be able to do that so easily in the pros.

Towns will need to put in a lot of work this coming offseason if he wants to be an impactful center in the NBA immediately. It is looking more and more likely that he will be either the first or second overall pick in the draft, which would indicate that he immediately gets starter minutes. If Towns gets in the gym and works on his post game, he may become one of the most feared big men in the NBA in a couple of years.

Karl-Anthony Towns’ NBA player comparison is DeMarcus Cousins. They both have a very similar offensive game. Towns, like Cousins, can use his underrated ball handling ability to create separation from the defender if he needs to. Both of them shoot right around 80% which is extremely rare to see from a big man. The differences between the two are that Cousins is a better rebounder and scorer, but Towns has the stronger defensive presence. This comparison is truly the closest one to Towns because there aren’t too many centers who have the kind of athleticism and jump shot that Towns possesses. Karl-Anthony Towns is still a ways away from being as great of an offensive force that Cousins is, but if Towns becomes a constant gym rat, the ceiling is the limit in terms of what he can become.

Top Sleepers in the 2020 NBA Draft

What inspires you to play the game of basketball?