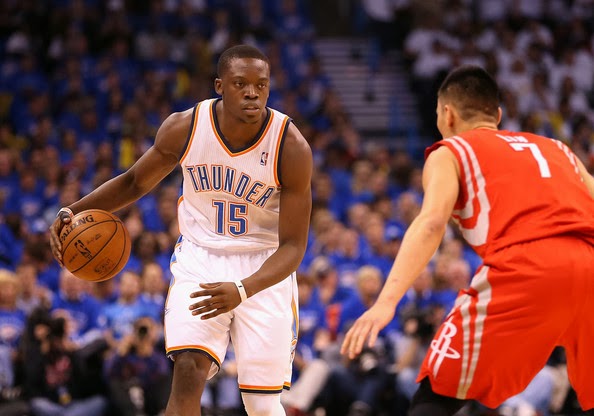 The Oklahoma City Thunder organization has had the lingering thought of Reggie Jackson this summer due to free agency. Reggie Jackson has reiterated many times that he wants to be an everyday NBA starter, which is something he doesn’t do in Oklahoma City. He wants to be the team facilitator, and run a team’s offense. He is likely to have teams around the league offering him starter caliber money.

His stock rose even more in the beginning of the season when he was the everyday starter when star Russell Westbrook was out with injury. The Thunder have already made a trade to acquire Dion Waiters from the Cleveland Cavaliers, and it seems Waiters is getting more priority over Jackson, as he is usually entering the games before him.

Darnell Mayberry of the Oklahoman asked Jackson how he is handling the trade rumors:

“Probably better than you are. Y’all are bringing it up,” Jackson told reporters. “I can’t control it. I just go play whenever I’m put on the court. That’s about all I can do, all the control I have. Just go from there. I’m happy (Waiters) did well. I’m happy he made a big shot. I’m just happy we got a win.”

Don’t be surprised if a trade goes down, as Oklahoma City is known for surprise trades. In the games Jackson started this season for OKC, when Westbrook and Kevin Durant were lout, he scored 20.2 ppg but shot just 41.6 percent and hit 27 percent from three.

Was Michael Jordan an underrated passer?

Martin Soaries - September 17, 2022
0
"The Redeem Team" is getting its own documentary. The 2008 Olympic team brought together the NBA's top players for an epic gold medal run in...

Was Michael Jordan an underrated passer?

NBA Greatness and NBA’s Best: Is the GOAT the BOAT?