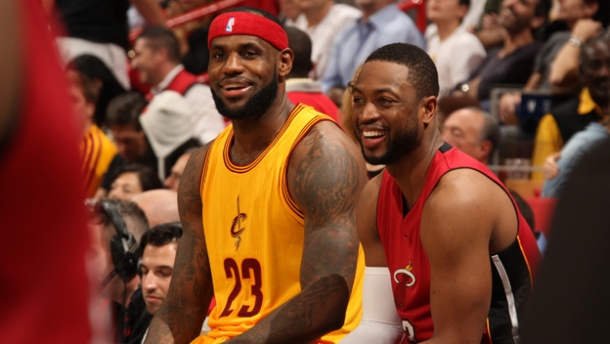 The NBA Playoffs always have compelling storylines in each series, from the first round up until the Finals. According to Ira Winderman of the South Florida Sun Sential, we could potentially have a first round matchup in the Eastern Conference that’ll be one for the ages.

The Miami Heat currently have the 7th seed in the East and if things stay the way they are, they could be playing against former teammate LeBron James and his Cleveland Cavaliers.

On July of 2010, James made a shocking decision to leave Cleveland and head to South Beach, and it proved to be a smart one. James and the Heat made the Finals all four years he played there, winning two championships in the process. This past summer he decided to ditch the Heat and come back to the Cavaliers in hopes of bringing the city a championship. When asked about the potential matchup with his old buddies, Lebron had this to say:

“You look at the standings, you see who’s two-seven. If we continue to do well, we’ll probably face the seven seed and we’ll see what happens then………But it’d be good for the fans, for sure. And it will be good for me and D-Wade, just being two guys that love to compete.”

If the season ended and the Cavaliers and Heat had the 2nd and 7th seed respectively, it would be the first time these two teams ever faced each other in a 7-game playoff series. Miami currently is also fighting with the Nets, Celtics, Hornets and Pacers for the final two playoff spots.

Should be an interesting fight until the end of the season to to see which of those teams are on top. Miami has to be extra motivated now that they have the opportunity to stop the Cavs’ run the Finals.