As most of you are aware, the Detroit Pistons will be retiring Ben Wallace’s number 3 tonight. Big Ben had came a long way to get to this point being a legend in the Motor City. Even Draymond Green, a Michigan native, was inspired by what Ben Wallace did in the league and made him the player he was today, which you can view more here.

Wallace started off his basketball career at Cuyahoga Community College, where the man averaged 16 rebounds and nearly 7 blocks per game. Those eye-popping defensive statis did not help him transfer to a big time school, so he landed at Virginia Union, a Division II school. Despite all the accolades and leading the team to a 28-3 Final Four appearance, Wallace went undrafted in 1996. The reason no one decide to take a chance on him on draft night? He was undersized (6’8″-6’9″) for a center and could not shoot to save his life. He did have one thing, and that was the presence of a great defensive anchor, but being in the NBA meant that you had to have some sort of ability to score, and Wallace did not have that.

After trying out for and not making Viola Reggio Calabria, an Italian basketball team, he signed on with the Washington Bullets. His rookie year was nothing spectacular, averaging just a point and under two rebounds per game, playing only 34 games total. His sophomore campaign saw little improvement, averaging 3.4 points, 4.8 rebounds and a block per game, playing in 67 games. Seeing more improvement on the defensive end, the now Wizards gave him more playing time in his third season. However after failing to reach the playoffs for three straight seasons, Washington needed to make moves.

Before his fourth season began, Wallace was traded to the Orlando Magic. During his lone season for the Magic, Wallace started and played in 81 games at the power forward/center spot averaging 4.8 points, 8.2 rebounds, 0.9 steals and 1.6 blocks per game. He helped the team win 41 games, but again failed to reach the playoffs in his career. When the season was over he was dealt again, this time to the Detroit Pistons, in exchange for Grant Hill. What seemed like a one-sided trade for Orlando ended up working out in the Pistons favor. 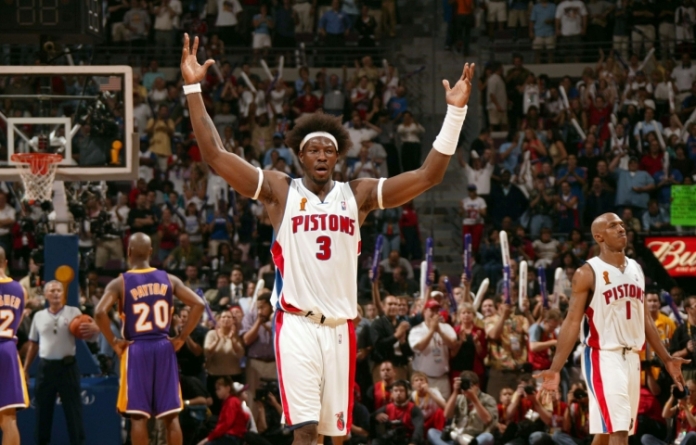 Once in Detroit, his career skyrocketed, placing in the top 10 in rebounds and blocks every season from 2000-2006. He made his mark in the early 2000’s as one of the best defensive players the game has ever seen. Here’s a list of Wallace’s accolades during his time in a Pistons uniform:

Perhaps one of his biggest accomplishments was winning a title back in 2004. The 2003-04 Detroit Pistons is my all time favorite NBA Championship team. Viewed as the underdogs, the team competed against the star-studded Los Angeles Lakers team that featured not only Kobe and Shaq, but also Gary Payton and Karl Malone, two NBA veterans hungry for their first title. With the series tied at one apiece, the Pistons dominated the rest of the way, including a career-best 18 points and 22-rebound performance from Wallace in Game 5 to seal the deal. In classic David vs. Goliath fashion with Ben and Shaq, the underdog (Ben Wallace) went on as the champ.

After his time in Detroit he signed with the Chicago Bulls and had a decent year with the team before being dealt to the Cleveland Cavaliers in hopes of helping LeBron James win a championship for Cleveland. After two unsuccessful playoff runs he was traded away to Phoenix for his old rival in the Finals, Shaquille O’Neal. He was waived that same day and spent the final three years of his career back where he had success, in the Motor City. Although he was not the same player he used to be, he was still able to accomplish some things while leading and teaching young Pistons like Greg Monroe on how to be professionals in the NBA. As far as playing, he also became the 34th player to reach the 10,000 mark for rebounds, is the record holder for most games played for an undrafted player (1,088) and became the Detroit Pistons all-time leader in blocked shots with 2,001.

When you ask any basketball fan who their favorite player is, most would say MJ, Kobe, LeBron etc. Not me, I say Ben Wallace. Wallace was the first guy that got me into basketball. I remember being younger, pretending to miss shots and try to re-create Wallace-type put-back dunks. When I got older and started playing competitive games I played just like him — with a defensive tenacity to grab every rebound and block every shot I could while I was on the court. When he had his line of “Big Ben” sneakers with Starbury, I had all of the pairs and wore them when I played. Even today when I play pickup games at school I still play defense first, because that was how I played growing up.

What I also like about Wallace is his story. It’s not everyday you see an undrafted player from a Division II school make it into the NBA and be named an All-Star Starter (which only Wallace has done), and be one of two players (other being Dikembe Mutombo) to win the Defensive Player of the Year award four times. He went from a guy everyone doubted and overlooked to arguably one of the best rebounders and shot blockers the league has seen.

Congrats again to Ben Wallace for the jersey retirement! Hopefully the next stop is the Hall of Fame.