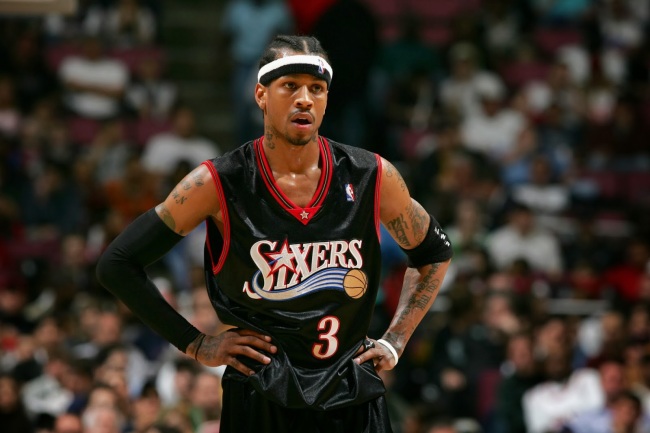 Allen Iverson would love to help the 76ers escape their struggles.

It’s no secret that the 16-52 Philadelphia 76ers are in the midst of a lengthy rebuild. During this retooling process, we’ve seen the 76ers trade fan-favorites, stash a surplus draft picks and become somewhat of a revolving door for fringe NBA players looking to find their niche in the Association.

Philadelphia is desperately looking for that transcendent player to help them return to prominence, just as iconic guard Allen Iverson did during his remarkable run with the franchise during the late 1990’s and early 2000’s. Iverson, who enchanted the entire city of Philly in 2001 when he won MVP and took the 76ers to the NBA Finals, believes that his input could help Philadelphia escape mediocrity and return to being one of the more respected team’s in the NBA.

“I would like to be even in that war room,” Iverson told Comcast SportsNet Philadelphia on Tuesday night. “Even if they don’t go with my decision or whatever, just to have an opinion and putting out what I think and trusting the organization to do what’s right.”

Iverson was selected by the 76ers with the first overall pick in the historic 1996 NBA Draft, and was able to captivate the city by displaying a level of toughness and heart that was remarkable for a guy of his stature. He was fiery, fearless and relentless, qualities that are synonymous with Oklahoma City guard Russell Westbrook, who apparently Iverson is a big fan of.

“The fight,” Iverson said. “The fight in the guy. I’m the biggest Westbrook fan, I think, there is. You know what I mean? Because he reminds me so much of myself as far as his heart and laying it on the line night in and night out. Just a guy that’s going to bring it every single night.”

Iverson isn’t the only NBA legend that has recently verbalized their admiration for Westbrook’s competitive spirit and nastiness. During an interview with Ahmad Rashad of NBATV, Kobe Bryant stated that he views Westbrook as somewhat of a successor to himself as being the league’s fiercest player, and he echoed this sentiment during The Grantland Basketball Hour with Bill Simmons and Jalen Rose.

As for Iverson, maybe the 76ers will allow him to control how they operate their practices, because we all know how much A.I. loved practice.

Why studying game film is important

djallen23 - December 11, 2015
0
Watching game film is a part of the game that goes unappreciated, especially by young players. I know when I was young, I used...

J Cole had one of the greatest halftime performances of all...