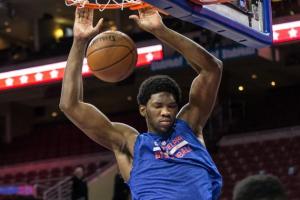 We all know Joel Embiid didn’t see the floor this season due to injury. He was all but a lock to be the #1 pick in the 2014 NBA Draft until a broken bone in his foot lead to him falling ultimately to the 76ers. Coach Brown saw this as an opportunity to work with a player of great potential.

“There were times I wasn’t happy,” Sixers head coach Brett Brown said Thursday afternoon. “If you can’t coach your best players, I call it buying time and dying. You have nothing. I tell my guys all the time you want me to coach you. You want to show up and be on time. You want to do the right thing. You want to act the right way.

Embiid turned a corner when doctors cleared him for on-court activity.

“When he started going to the court, his world changed,” Brown said. “He had his spirit again, and things got a little bit easier. I don’t begrudge Joel or Nerlens — they’re 20-year olds. It is my job to coach them and build a culture. That is what we experienced this year, but we will be better off for it, like we saw with Nerlens, when [Embiid] is a playing member of the Philadelphia 76ers.”

I would only consider this a small red flag for the Sixers organization. Embiid’s work ethic seems to be there when we see him in Instagram videos doing dunks.

We should just assume that this is just Joel’s way of saying he is frustrated with not seeing the floor this season. He’ll get the opportunity this summer when he is able to show off his skills at the NBA Summer League. When healthy we will be seeing a young twin tower tandem of Noel and Embiid.

Why studying game film is important

djallen23 - December 11, 2015
0
Watching game film is a part of the game that goes unappreciated, especially by young players. I know when I was young, I used...

J Cole had one of the greatest halftime performances of all...