The following takes are satire…maybe(?)

The NBA Trade Deadline is this week and OH YEAH BABYYYYYYY.

For this one week only, literally every single human-being to have ever played basketball is rumored to be traded to or from the Rockets. From Woody Harelson’s character in White Men Can’t Jump to Dwight Howard, seemingly everyone is up for grabs and hot damn, do I love it.

The joy of hopping on the fire-breathing twitta machine each morning and seeing a seemingly endless stream of Woj Bombs is a genuinely breathtaking feeling. It’s like if you woke up, rolled over, ripped a line of cocaine, then started making insane NBA trades up, only this time about 5 percent of them will actually happen!

There may seriously not be a better feeling than seeing the Orlando Magic fanbase crumble in despair after they trade away a legit stud like Tobias Harris for…Brandon Jennings? Jennings was horrifically inefficient before injury, after rupturing his achilles I’d imagine he’ll be a step ahead of Bernie Sanders balling out while waiting for polling results in New Hampshire.

As a Knicks fan, the joy I get from watching other fanbases feel my pain is actually a bit of a problem. Seriously, HOW YOU LIKE US NOW MEMPHIS!? Have fun with PJ Hairston when we steal Mike Conley from you this summer, nerds.

As much fun as seeing a fanbase march on their arena and march around with their General Managers head on a pike is, the true joy in NBA trade deadline week isn’t found within the league at all, but with how it’s covered.

I’m talking about you, Chris Broussard. 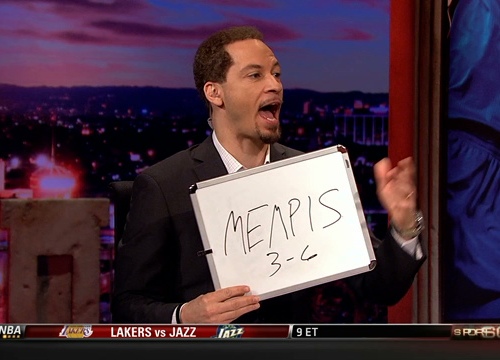 For one shinning week a year, we get to see that the ESPN reporters sources are indeed the voices inside his own head. This is a man who has been wrong about contracts or deals involving Deron Williams, Eric Gordan, Tristan Thompson, that whole Deandre Jordan/Chris Paul/Doc River sleepover from last summer, and Dwight Howard.

The guy shoots about 50 percent on his reporting and on trade deadline week, he’s the number two guy behind Our Lord And Savior Woj. It really goes to show how bat-crap insane (there shalt be no cursing in my column, for I am not here to poison the youth) this week is. If there is “NBA” somewhere in your twitter bio and “sources” say it happened, you bet your ass it happened.

Fake Of The Week

The only human to have combined ultimate stupidity with incredible intelligence to absolute perfection, West dropped his latest album, The Life of Pablo, this past weekend. I’m not big into the hip hop crap (but Waves is the best track on that thing, fight me) and I’m sure this will only lead to some dance craze I’ll have to write to the NFL about stopping, but apparently it’s pretty good.

Oh, and Kanye is also full of it.

Mr. West has become Twitter’s leading man over the past week or so, going on a variety of rants.  It’s almost like he’s on drugs or something and crying out for help or something I don’t know of anyone who has ever gone on the internet and done crazy things, then end up addicted to drugs and with AIDS….and their name certainly doesn’t rhyme with Barlie Leen.

On one of his more colorful rants, Kanye went off on the price of college textbooks and how his “friend” makes $370 a day and struggles to pay for these textbooks. The story of Kanye’s poor, struggling friend that makes nearly six-figures if he works five days a week truly was touching to me, for the record.

Kanye’s point is wrong in the first place, seeing as student debt is actually something being used to ease racial tensions in this country. Black, White, Asian, Indian…it doesn’t matter because at the end of the day, we will all be in soul-crushing debt for the remainder of our existence. It’s beautiful, really.

But hey, if a multi-multi-multi-millionare wants to preach about how unfair the system has been to him, preach on.

Pot meet kettle RT @kanyewest: We have to lower the price of textbooks… pic.twitter.com/QOywUUxFnB

A Kanye West sweater that looks game-worn going for…$455! And by game-worn, I mean worn to a free minor league baseball game by a homeless man looking for something to do.

Who Got Lit, Who Got Left?

Amazingly, Kanye was both lit, and left this week.

First, we saw him take a bit of a victory lap around Madison Square Garden when he dropped his new album, which was kinda cool! Okay Ye! We see you!

Kanye got left pretty big time when he admitted that despite having a wife worth over $100 million and personally being worth over $85 million, both of which are according to the fine folks at Forbes (nerds), he is $53 million in debt.

Alex Fischbein - July 8, 2020
0
Welcome to Senior Send-Off! This is a series where we highlight the seniors that we covered or watched extensively throughout their senior season. Check...

BLOG: What it means to be a holistic hooper

Report: Mikey Williams could be moving to North Carolina

Cameron Carter - February 24, 2019
0
The number one eight grader in the country Mikey Williams will be packing his bags soon, to move to North Carolina sources tell Basketball...

Michael Beasley: The road too rough to travel

BLOG: What it means to be a holistic hooper