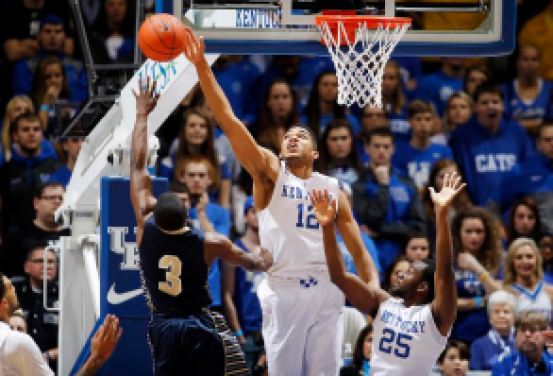 “It’s done, he’s going to Minnesota,” the source said. “[Minnesota President and coach] Flip Saunders was big on Jahlil Okafor for a minute there and after Karl came in [on Saturday], he decided to work out for them. He only worked out for them and it’s a wrap. It’s a wrap. They just told him they’re going to take him No. 1.”

From the Dominican Republic, Karl-Anthony Towns will be the third consecutive prospect born internationally to be drafted #1 overall. Anthony Bennett and Andrew Wiggins are Canadien born NBA players who were the last two taken #1 overall. They are both members of the Minnesota Timberwolves.

After Minnesota was guaranteed the first pick of the draft, Towns said:

Towns put on a show at a recent draft workout. He proved to all NBA scouts he isn’t the average big man. Here is his dunking workout:

Karl-Anthony Towns is a beast. Knowing he could possibly be going #1 overall, he didn’t workout for any team except the Minnesota Timberwolves. Jon Krawczynski of the Associated Press reported:

Kentucky big man Karl-Anthony Towns worked out for the Minnesota Timberwolves on Saturday, less than a week before the Wolves pick first in the NBA draft.

Towns arrived in the Twin Cities on Friday night. He took a tour of the Wolves’ new $25 million practice facility and dined with owner Glen Taylor, President Flip Saunders and several other team officials.

With Karl-Anthony Towns off the board, the next best prospects are Jahlil Okafor, D’Angelo Russell, Kristaps Porzingis, and Emmanual Mudiay. The Los Angeles Lakers have the #2 pick of the draft. The Lakers seem set at drafting Jahlil Okafor with the second pick of the 2015 NBA Draft. The NBA Draft is Thursday, June 25th, 2015.