Taking the step from college to the NBA is a major step for young athletes. Professional basketball gives players exposure to many things that they have never seen or been apart of before. It takes a lot for these kids to get adjusted and prepare themselves for their life in the NBA, so today I’m going to take a look into the big adjustments that players have to make before entering the NBA.

The competition level in the NBA is much higher than in college basketball. The NCAA schedule is set up where in the regular season schedule there are a few high-level games, whether it’s playing against a highly ranked team or playing against a conference rival. On the other hand, in the NBA, players are playing against the best players in the league every night. A player can go from facing James Harden and Dwight Howard one night to trying to stop Russell Westbrook and Kevin Durant the next night to playing against Kyrie Irving, Kevin Love, and LeBron James all in the next game. There are difficult matchups on a night-to-night basis which leaves zero room to let up.

NERD NOTES: If the Knicks & Kentucky played on a neutral floor with college rules, NYK would be a 13.5 point favorite. (via @Westgate_LV)

There has been recent chatter that the Kentucky Wildcats could beat the New York Knicks if they played against each other, which is strictly blasphemous. The difference in level of play and ability between the pro level and college level is what gives the Knicks that advantage. It’s not easy to make it to the NBA, so every guy in the league is there for a reason. Each player from the number one guy to the last guy on the bench was once the main guy on their college team, so to put it in perspective, there are no scrubs in the NBA. Every guy can ball.

Most rookies in the NBA will tell you that the biggest adjustment from college to professional basketball is the speed and physicality. The game is much faster and the players are much stronger when you take that next step up. Cody Zeller gave his opinion on his rookie season and getting adjusted to the NBA.

“It’s a tough process going from college to the NBA. The game is so much different, both on and off the court it’s a big adjustment but I feel like I’ve made the adjustment pretty well. It’s definitely been a fun year for me.”

“I think there’s so much that’s different really both on and off the court. On the court, you’re playing against grown men every night. The style of play is a lot different than college. I think the biggest difference is just that night in and night out you’re playing against the best players in the world. And you know, in college, maybe you have a few good games each year, a couple tough matchups but in this league it’s the best players in the world every night. There’s no easy games. There’s no non-conference games, none of that. We just played San Antonio, Oklahoma City, Miami and we’ve got the Pacers tomorrow.”

Playing against teens and young adults is not the same as playing against grown men. During draft season, you hear analysts talk about the physical attributes of the college players in the draft because that matters. Guys like Steph Curry and Kevin Durant were criticized coming into the league due to their lack of strength and scrawny body features. However, what makes some players better than others are the ones that can adapt and compete at the highest level. With the way players are developing and the way the game is being played, it’s imperative that players can guard any position. If a player is too slow to guard a pick and roll or a face up center that can put the ball on the floor, than they won’t last long in the NBA. 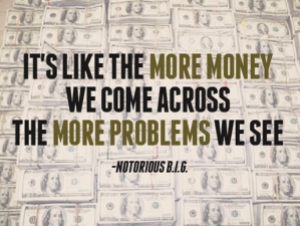 The adjustment a lot of people forget about is the money and the fame. Like the late great Notorious B.I.G. said, “Mo’ Money, Mo’ Problems.” When these young kids enter the league, they are introduced to sums of money and exposure that they are not accustomed to having. In some cases, money changes a person, but in most cases, money changes the people around a person. A lot of friends and family members that you haven’t spoken to in ages come out like roaches to ask for things so It’s a lot for these athletes to deal with at a young age.

According to a 2009 Sports Illustrated article, 60 percent of former NBA players are broke within five years of retirement. By the time they have been retired for two years, 78% of former NFL players have gone bankrupt or are under financial stress.

In a lot of cases, the money and the fame starts to consume the players, so they start to lose sight of the game. Some players get into things such as gambling and drugs and it begins to slowly pull them away from the reason they were able to earn all that money. We’ve seen a lot of people come and go in this league as well as players go bankrupt, so it goes to show that the lifestyle is not an easy one.

Can Kawhi Leonard Become the Leader That The Clippers Need?

Basketball is supposed to be fun

djallen23 - July 24, 2017
0
James Naismith created basketball to keep his students busy. It was a game that was created to be fun. It started as a game...

The Importance of the Hop Step

Understanding purpose is important in basketball