Kyrie Irving has developed into one of the deadliest scorers in the game.

Okay, I’ll admit it. I used to yap constantly on Twitter about how Kyrie Irving was one of the NBA’s most overrated players. When discussing top five point guards in the Association, I excluded Irving for the obvious suspects: Chris Paul, Stephen Curry and Russell Westbrook, with Tony Parker and John Wall rounding out my top five. When friends and fellow basketball junkies inquired as to why I was omitting Irving from my list, I spewed out some weak facts with more than a pinch of bias in them, and scoffed at anyone who inserted Irving in their top point guard rankings.

“Kyrie is inefficient, he hasn’t done much during his time in the league. If he was so good, then why isn’t Cleveland in the playoffs in the porous Eastern Conference? Plus, he plays NO defense!”

My growing admiration for John Wall’s game sadly made me develop a significant amount of resentment towards Irving, as deep down I knew he was a legitimate threat to Wall’s status as a top-five point guard in this league. How did I come to this conclusion? I had spent some time salivating over Kyrie’s offensive brilliance during his early days in the league, like my dog when he sees my mom fishing around the cupboard for his puppy chow.

I watched him hit clutch shots on the road, I watched him leave defenders in the dust with artful dribbling moves, I watched him slither his way to the rim and finish at the basket like only Kyrie can. And I relished every second of it.

Although I had become enchanted with Irving and his absurd offensive arsenal, I was infatuated with the speedy floor general Wall even more. Not quite the scorer or shooter Irving is, Wall is a two-way point guard that can push the ball in transition at breakneck speed and bombard his way to the rim, or get your team a clean look in the half-court with his sharp playmaking ability.

After Wall and the Washington Wizards topped the defensive juggernaut Chicago Bulls in the first-round of last year’s NBA Playoffs, I felt as if I could gloat because Irving had yet to make a postseason appearance. But when LeBron announced he’d plan to return to the Cavaliers, I knew that was destined to change. So to gear up for increased national television exposure and fan-hype for Kyrie and the Cavs, I decided to just scrap the hate and fully embrace Irving. 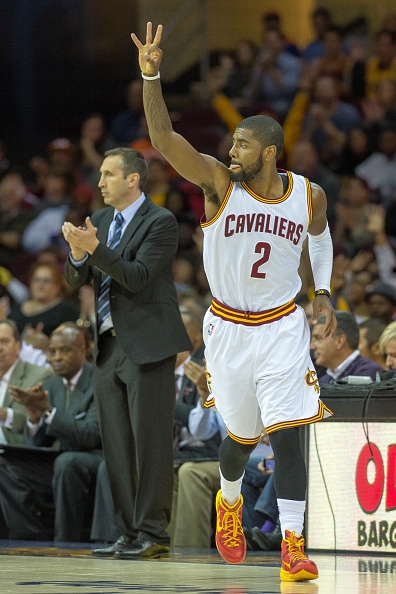 First off, let’s not get it twisted, from day one I recognized Irving as an offensive dynamo with the ability to punish any defense with his electric crossover and tough shot-making ability. Yes, my preference for Wall led me to somewhat loathe Kyrie, but I also admitted that he was on the verge of superstardom and becoming a top-five point guard.

So let’s step in the present. The Cavaliers are sitting at 52-29 which is good enough for 2nd in the Eastern Conference, and they are gearing up for what they hope to be a deep and fruitful postseason run.

Kyrie is one of the smoothest offensive players in the league, and when he’s on fire your eyes better be deadlocked on that television screen or you might miss insanity. Not only has he hushed me and my semi-hating ass up, he’s entered my top-five point guards list and leapfrogged the guy I lobbied for as the superior player.

How has Kyrie captivated me even more? Let’s examine this and how he’s become one of the game’s best point guards and scorers this season.

Kyrie Irving is a lethal three-point shooter. With the exception of last year (35%) Irving has always shot a pretty healthy percentage from behind the arc (39% on at least 3.5 attempts per game during his first two years.) He’s twelfth in three-pointers made amongst all NBA players with 156, and he’s third among point guards behind three-point assassin Stephen Curry and the sharpshooting Damian Lillard. Irving and Curry are the only two players in the NBA this year with at least 150 made threes on 40% shooting from downtown and 350 assists.

I know that criteria was kind of stiff, so I expanded the field by knocking out the 40% shooting from three as a requirement. The results were nearly the same, but Lillard and James Harden joined the party this time.

See the thing about Irving is that he’ll show off his sweet three-point shooting stroke in a multitude of ways. He shoots 37.6% on pull-up three-pointers, a higher clip than LeBron, Lillard, Westbrook and Harden. He’ll torch the nets in catch-and-shoot situations (45.9% from three on catch-and-shoots) and he shoots 39.4% on shots from 25-29 feet.

Irving will nail three-pointers wherever and whenever and it’s so entertaining to watch.

In the paint/driving to the rim

If you let Irving get into the paint you are screwed, because he’s most likely going to convert on one of his nifty layups that he somehow always finds the strength to get up on the rim. Irving’s numbers when puncturing the defense and getting in the paint are top-notch. He shoots 56.8% on shots less than five feet from the basket, he shoots a robust 48.7% on drives, and has scored a total of 519 points on drives which is 4th best in the Association. Irving’s stature (6’3, 193 lbs) allow him to handle body contact from behemoth’s lurking in the paint, and Irving’s 2.1% and-one frequency in pick-and-roll situations as the ball handler illustrates how great he is at absorbing the blow and still converting the basket.

Consider that Irving’s not nearly as explosive athletically as some of his counterparts at the point guard position, and the numbers become that much more impressive. Irving is a sly and menacing slasher, and letting him penetrate the defense is a recipe for disaster.

Let’s take a stroll down memory lane. Remember Jordan’s hand-switch layup against the Los Angeles Lakers back in 1991 NBA Finals? Do you recall when Allen Iverson dropped 48 points on the Lakers in game one of the 2001 NBA Finals? Does LeBron’s game-winning three-pointer vs. Golden State last season ring a bell?

Special players produce special moments, and Irving has had his fair share of noteworthy outings and moments this year. He dropped 57 points against the San Antonio Spurs, and dropped 55 points on the Portland Trail Blazers, becoming the first player since Kobe Bryant in 2005-2006 with multiple 50-point games in a single season.

Irving is prone to leave you mesmerized. I’m talking eyes wide-open and mouth agape. You really shouldn’t be surprised if your jaw hits the floor. Vine? That’s Irving’s unofficial basketball domicile. Those six-second clips were made to capture Irving’s nastiness.

The Cavaliers will wrap up their season on Wednesday with a home game against the Washington Wizards, and then they will prepare to wage war on the Eastern Conference as the championship-starved city of Cleveland hopes LeBron, Kyrie and Kevin Love can land them their first NBA championship in franchise history. Throughout the course of the regular season, I’ve expressed my excitement to see Irving play in the postseason, as playoff basketball had been a foreign affair to him prior to this season.

Maybe if I doubt Irving and his lack of playoff experience, he’ll go bonkers and shut my chirping up for good. That definitely sounds tempting, but I’ve had much more fun applauding Kyrie and cheering him on. I’ve definitely hopped on the Kyrie Irving bandwagon, and if I’m not navigating the surely overcrowded vessel right now, I damn sure will be soon.

Where would you rank Kyrie Irving in terms of best scorers in today’s NBA? Hit us on Twitter with your thoughts and opinions. @BBallSociety

The Lakers can benefit from an offensive coordinator