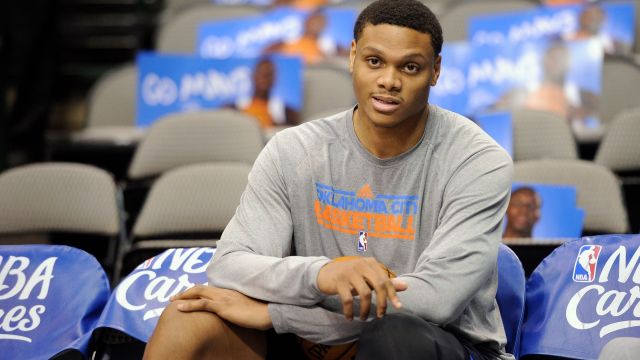 Daniel Orton is now out of a job.

Former Oklahoma City and Philadelphia Sixers big man Daniel Orton was signed by the Purefood Star Hotshots of the Philippines Basketball Association earlier this month, but was released from the team on Tuesday for insulting boxing and Filipino icon Manny Pacquiao. Pacquiao, who has an affinity for the game of basketball and actually worked out with the Golden State Warriors this past fall , appeared in a game for the Kia Carnival against the Hotshots, a team that he coaches and owns, several weeks ago. Pacquiao scored a single point in the victory.

Orton, who was the Hotshot’s designated foreign player, wasn’t too fond of sharing a court with Pacquiao during a professional basketball game, and voiced his displeasure to the Philippines media:

Rene Pardo, the top administrator of the Hotshots, stated that ties with Orton were indeed severed due to his insult of Pacquiao.

Everyone is angry at him… it is like he went to the United States and insulted the name of Martin Luther King,” the ABS-CBN news website quoted Pardo as saying.

Orton was fined 250,000 pesos as well, which is the equivalent to $5,650. Chito Salud, the commissioner of the PBA, issued a statement on Tuesday that revealed how disappointed he was in Orton.

“This office disapproves of and frowns upon the cavalier manner in which Mr Orton issued his comments and the unwarranted antics and liberties he has taken with the league and a fellow player.”

“This insulting behaviour will never be condoned by this league.”

Orton took to Twitter to thank the Hotshots for his brief opportunity, and wished them the best of luck in the future.

I thank God for my time in the Philippines and thank Purefoods for everything. I wish the team the best of luck this conference!! God Bless!

Orton learned the hard way that Pacquiao is a very big deal in his native country. Pacquiao-fever is most likely at an all-time high, as Filipino’s are surely gearing up for his long-awaited match against Floyd Mayweather on May 2nd. How does Pacquiao plan to prepare for the biggest boxing battle of recent memory? By continuing to play basketball. He’ll appear in the Carnival’s game next Wednesday.