Everyone knows that scoring is one of the most important things in the game of basketball. It takes a lot of skill to be a great scorer in the NBA.  At a young age, players are taught different moves to be able to create space and get open for shots — whether it’s a crossover, step back, or a pump fake for a pull-up jump shot. As a scorer, the ability to create space for yourself is so essential because that’s what differentiates great players from the average. There are only a few players that possess special moves to provide buckets for their teams and I want to highlight three of a few that stick out to me.

“Chef Curry with the Pot Boy.” When people think about Stephen Curry, what they think about is his ability to shoot which is obvious. However, many people don’t appreciate his ability to get to the basket. Curry is more than a shooter, he has 230 shot attempts within 5 ft. of the basket whereas the other majority of his shots are outside of the three point line.

What stands out to me more is the scoop lay-up/floater that Steph has added to his arsenal. He shoots the finger-roll high off the glass over bigger defenders that they cannot get their hands on. It’s a move that you don’t really see often anymore that was perfected by the shorter guards back in the day but Curry added his own twist to it, making it an underhand floater rather than an overhand floater which allows him to get it off quicker. It is proven to be a deadly move if executed correctly.

The step back in my opinion is the second most effective move behind the pump fake. This move creates so much space if you can get your defender on their heels and what’s more important is that you have alignment and are square up with the basket before going into your shot. And obviously of course you have to make the shot, because a move is nothing without getting points on the board. I’ve witnessed Lebron James score many of buckets using this exact move.

King James utilizes the quick step back in which he takes one dribble, steps back and shoots the J. When he is hitting this shot, it’s impossible to guard. Most defenders play off of Lebron because of his ability to get to the basket so when defenders get brave and want to play up close, he likes to use this move to draw more space and get the jumper off cleanly. 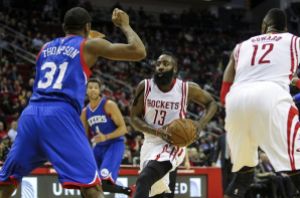 James Harden has been a machine this year, leading the league in scoring and arguably holding down the number spot for MVP. We always knew he had the ability to score in Oklahoma City but we’ve seen an emergence since he joined the Houston Rockets. One thing that Harden has undeniably perfected is his ability to get to the rim and finish — however it’s not just finishing, it’s also getting fouled.

James Harden has the most free throws attempted with 543 free throws taken which is 146 more attempts than second place. When he drives to the basket, there are two techniques that he uses to his advantage.

What he does is he drives his shoulder into the chest of his defender, drawing contact and he also extends his arms luring defenders to reach giving referees and incentive to blow the whistle. His move is so effective because that little nudge gives him space to get off his shot and when he extends his arms, he presents the ball which will force any defender to reach. It’s a move that Harden has perfected which I think the league will look at going forward due to the big margin in free throw attempts. If you honestly watch, he gets away with a lot of offensive fouls due to him throwing himself into defenders but hey, he’s getting away with it so why stop now.